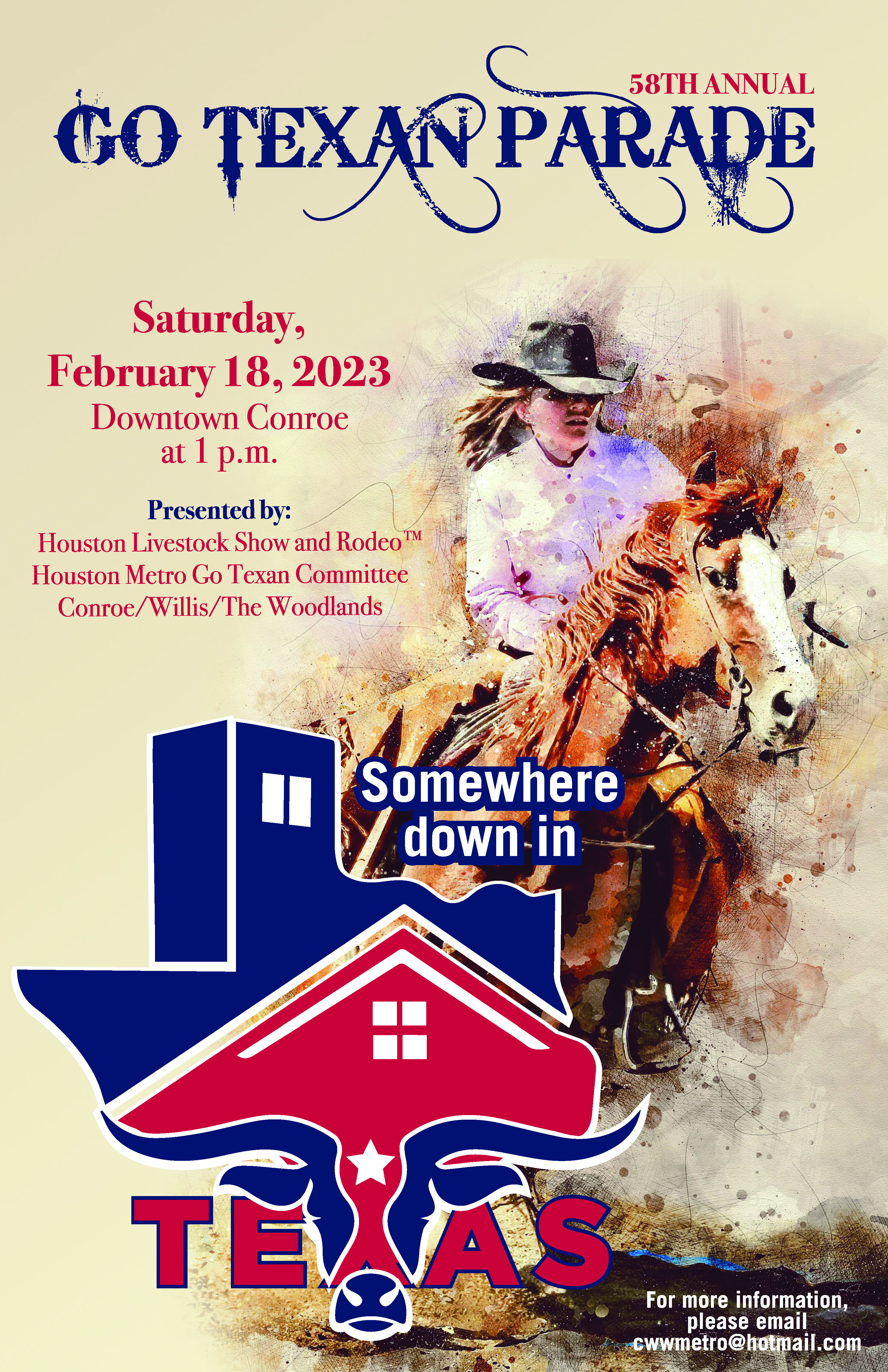 Celebrate the start of the of the Houston Livestock Show and Rodeo™ at the 58th Annual Go Texan Parade as decorative floats intermingle with hundreds on horseback to fill the streets with hoof beats, marching bands, elected officials, businesses and organizations.

Enthusiastic parade spectators can line the streets and sidewalks to be involved in one of the area’s most popular celebrations! The parade takes place Saturday, February 18, 2023, at 1pm in downtown Conroe.

The parade is presented by the Houston Livestock Show and Rodeo™ Houston Metro Go Texan Committee Conroe/Willis/The Woodlands Subcommittee and the Conroe/Lake Conroe Chamber of Commerce.

This year, J.P. "Hap" Hunnicutt and Joe Van Matre will serve as Grand Marshals for the parade. 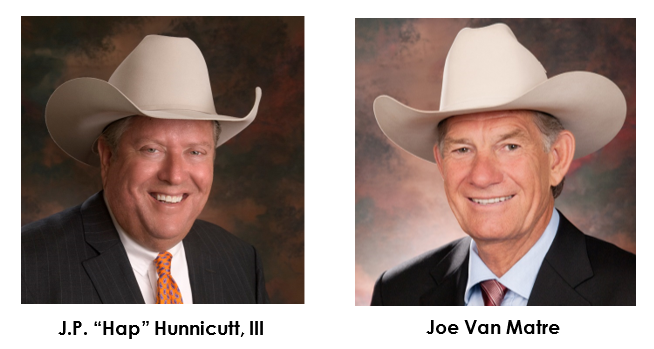 Hap Hunnicutt began his career in real estate in 1976 as an apartment property manager with the family owned Landmark Ventures.  He was called to public service in 1979 having joined the George Bush for President Committee followed by the Reagan-Bush Campaign and then the Reagan-Bush Transition Team.  In 1981 and 1982 he served in the Office of Vice President George Bush, primarily doing advance work all over the world for the Vice President.  In late 1982 Hap returned to Houston to the family owned Equity Development Company and currently serves as its president.

His love of Galveston encouraged him to begin participating in the reestablishment of the Mardi Gras festivities.  He was a founding member of the Krewe of Maximilian and later was honored to be its third King.  In February of 2017 Hap was named the recipient of the George P. Mitchell Mardi Gras Award.

Hap has been a volunteer at the Houston Livestock Show and Rodeo for over 42 years.  He has been chairman of numerous committees, has served as a Vice President, Lifetime Vice President and is currently serving as a member of its Executive Committee, which is the senior governing body of this 33,000+ member organization.

Hap is a proud alumni of both the Kinkaid School of Houston and the University of Texas at Austin, where he was a member of the Alpha Tau Omega Fraternity.

Ranching has also been a big part in Hap’s life.  He enjoys his family’s Post Oak Hills Ranch and the Dry Creek Ranch in Colorado County and is a proud member of the Tejas Vaqueros.

Additionally, Hap has investment properties in the City of Galveston and in Galveston County and he particularly enjoys his home in Lafitte’s Cove on the island’s West End.

Hap and his wife Chrissy, a very successful real estate broker, are long time residents of the Houston and Galveston Area and are proud of their participation in many Charitable and Non-Profit Organizations.

Joe Van Matre, a Louisiana native, attended his first Houston Livestock Show and Rodeo™ in 1975 when his employer transferred him to Houston. In 1978, he formed Specialty Rental Tools, Inc., headquartered in Lafayette, Louisiana. While maintaining dual residence in Houston and Lafayette, he became a Show season ticket holder in 1984. Four years later, he became a lifetime member and began serving in leadership roles on several committees. In addition to serving as a Rodeo volunteer for over 34 years, Van Matre’s willingness to drive three and a half hours to and from weekly committee meetings exemplifies his dedication to the Show.

Van Matre joined the Swine Auction Committee in 1994 where he has served as both assistant captain and vice chairman. In 2002, he joined the International and Donkey and Mule committees. He continued his volunteer efforts by joining the School Art Committee in 2008, and he served as chairman of the Rodeo Uncorked! Wine Sales Committee from 2011 to 2012. Van Matre also served as officer in charge of the Judging Contest, Sheep & Goat, Wine Events, Wine Garden, Wine Sales and Winery Relations committees.

For years, Joe Van Matre has been “all in” in terms of devoting talent and financial support to the Houston Livestock Show and Rodeo™. As an Executive Committee member, Van Matre brings the perspective of a successful entrepreneur, a tireless volunteer and an auction buyer willing to “go big” year after year. Van Matre understands not only what the Show does, but how to get the job done.

Currently, Van Matre works in executive sales at Workstrings International. In addition, he is owner of JEVM Rental Properties, LLC, in Victoria, Texas.

Van Matre serves on the board of directors for Dunn Exploration, LLC. and is a member of the Tejas Vaqueros; Scottish Rite of Freemasonry, S.J., USA; and the Arabia Shrine Temple.

Van Matre’s best Show-related memory, he said, was being introduced by mutual friends to his wife, Jennifer, who serves as vice chairman on the Wine Sales and Events Committee and is on the Auction Assistance, Events & Functions, and Trailblazer committees. The Van Matre’s live in Houston and are the proud parents of one son, five-year-old Bob.

Van Matre enjoys saltwater fishing, hunting at his ranches in Victoria and Del Rio, Texas, and relaxing at his Seadrift, Texas, bay house. He especially enjoys taking wounded U.S. veterans hunting on his ranch. He said that he appreciates the Show’s representation of the American spirit, cowboy history, U.S. heritage and military service.

The Go Texan Committee and the Chamber encourage you to join them as a participant or a spectator this year!

Register parade entries at link above or using the form below.
Parade spectators do NOT need to register.
REGISTRATION FORM

The Conroe/Lake Conroe Chamber is here for your business. Engage now to be a part of our community’s growth.